This image shows a broad swath of aurora over the northern United States.

Scientists have discovered that some of the aurorae are polarized. This discovery will help scientists better understand Earth's upper atmosphere and magnetic field, and will help them study the Sun wind.

Good morning! (EDIT: I did start writing this in the morning...) Ahhh; that was the first time I've slept more than six hours in a row for... well, too long. Refreshed! I think this Sunday-morning shot from Scott Edelman ( 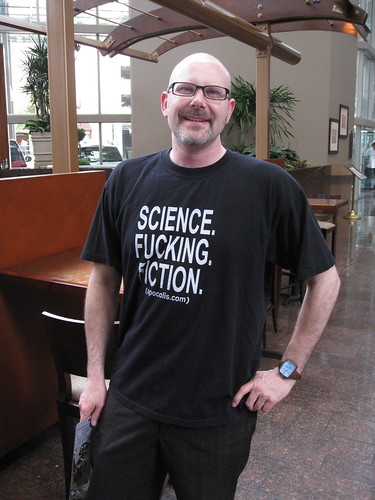 The Nebs were wonderful. This and other small, professional cons like World Fantasy mean a lot to me, because I get to see friends whom I only get to see once a year or so. It's lovely to meet colleagues in the business - and over time many of these do become friends - though I mostly use these events as an opportunity to get back into touch. For example, Joe Haldeman and I usually spend a few hours talking astronomy and life - when else would that be possible? I first met him and his wife, Gay, at ICFA in Florida many years ago, one of those serendipitous encounters that can only happen with the right alchemy of setting, time, and event. Now, seeing them at smaller cons is one of the highlights of my year. Same's true for Jack McDevitt and his wife Maureen, whom I met when his book, Omega, won the 2004 Campbell Award. Sadly, due to their daughter being ill, Maureen wasn't able to make it.

I also got a chance to spend some time with Gordon Van Gelder (my roomie, actually), editor of The Magazine of F&SF, whom I met farther back than that; perhaps a World Con in the 1990s? That kind of blows my "small-event" theory of meeting people. I guess World SF back in those days is also when I met Stanley Schmidt, editor of Analog Magazine, who bought my first (professionally published) story. I dined with and played pool against

robinbailey, whom - even though we live within an hour of one another - I pretty much only see at cons. Steven Brust made a stealth appearance (and says "Hi, Star!). Bradley Denton hosted a getaway at the Railroad BBQ near his place in the country outside Austin. Didn't have nearly as much time as I would have liked to chat with so many of you: Beth Meacham, Nancy Kress (who was as eloquent and charming as ever), Delia Sherman, Mary Turzillo, and many more.

sfreader and I ended up flying on the same flight both ways, even sitting next to one another on the flight to Austin! Here's his photo-essay of the Nebs. How you got all that up already when I am only just now posting this little write-up, Keith, amazes me.

It was great to finally meet

Of course, I got to see

_starlady_, and it was really nice to spend some time with

kijjohnson. One of my favorite shots (Click the image to see Keith's photos of the Nebs.):

Meeting new folks is nice, too! (I apologize for those I neglect to mention here.) For example, I got the chance to chat with SFWA's new Secretary (congratulations!)

stevengould and Laura Mixon (who kindly cheauffered a few of us in their hybrid car),

paulmelko, John Moore (who was also my contact for the Awards ceremony and emceed it wonderfully),

scottedelman, Sara Beth Durst whose novel Into the Wild was up for the Norton, Peter Heck, Mike Marano (my other room-mate), A. Lee Martinez, John Picacio,

stina_leicht, and so many more - I'll never finish this if I don't just stop now. I apologize if I neglected to list you here.

Other things I did include eating at The Ironworks BBQ, the Iron Cactus (not BBQ, but more iron), and visiting the Driskill Hotel, which gave me a real insight into the whole Texas Thing: It's opulent, designed and built in 1886 to show off Colonel Driskill's cattle wealth... but inside you'll not find overstuffed leather seating but instead horse-hair couches; rather than the kind of art you'll find at the Louvre, you'll enjoy oil paintings of donkeys running away from exploding oil wells. That was great. Conspicuous consumption, as with the Omni Hotel where the Nebs were hosted: The thing has a 17-story-tall lobby, glass on the sides and roof - which gave us an amazing show during the nightly thunderstorms.

Oh, I was part of the mass signing, where I actually signed several books (anthos such as Visual Journeys and ). A shot of that, also courtesy of Keith:

I co-presented the Andre Norton Award for YASF&F with

amysisson (which award I helped create, so that was especially pleasing). The finalists for that award included a few names that took some practice in order to pronounce correctly! (Including the winner, whose name many mis-pronounce.) Proof from Keith Stokes!

Oh, I suppose I should announce the...

Winners of the Nebulas!

Novelette: "The Merchant and the Alchemist's Gate," by Ted Chiang

Other honors given out during the Nebula Awards ceremony:

'Twas nice to see all of you! I must stop writing and post this thing.