Here's a great shot of Mars from above the arctic circle. Really captures the ambience of the place. Photo by the Phoenix Mars Lander:

Up here, the sun does not set during the peak of the Martian summer. I wanna go.

After too long not posting my Astro-Image of the Day, I hereby share a second one! The powers of teh intarwebs, they intoxicate me! Bwahahahaha!

Ahem. So here's the first image taken by NASA's newest orbital telescope, the Fermi Gamma-Ray Space Telescope (formerly known as the artist... er, as "GLAST." Yeah, the new name is cooler.). This powerhouse scans the entire sky every three hours while also performing detailed observations of the most-distant portions of the universe. Coool (er, hot).

Today's image shows the entire sky. The Milky Way Galaxy glows bright at the center, the Vela Pulsar, and the blazar (an extremely active galaxy) 3C454.3, billions of light-years away. This new FMGRST (er, maybe GLAST was more acronym-friendly) map is a composite of the instrument's first 95 hours of observations:

Oooh, this Wiki image of the Vela Pulsar is too cool not to share: 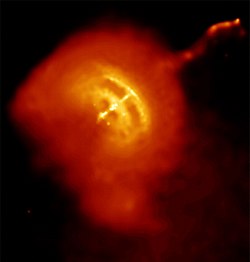 Check out this awesome all-sky version of the new image (very large).

Astronomy is awesome these days.