For some reason, a story about the star Betelgeuse (pronounced "beetle-juice") about to go supernova is making the rounds today. Back in late 2009, astronomers using UC-Berkeley's Infrared Spatial Interferometer at Mt. Wilson shared this amazing photo of the supergiant Betelgeuse - this is an actual photograph of the surface of another star!

Click the image to read the .pdf article by the scientists who released the image.
This shows bright regions where there should be dark spots, and other images show that Betelgeuse is shrinking and becoming mis-shaped: Indications of imminent collapse, and when the core of a supermassive star like Betelgeuse collapses, BOOM! You get runaway fusion and all kinds of wackiness, as the gravity of the shrunken star exceeds the forces within the atoms at its core. For the full story on Betelgeuse, click here to see my January post with lots more info, photos, and links.

What's a supernova? It's what you get when a supermassive star explodes, post-collapse. For a brief time (days or weeks), they shine as brightly as an entire galaxy of hundreds of millions of stars, and for millenia afterward, energy released in the explosion lights the gas around them in dramatic fashion - gases they blasted into space in the first place. Here's a photo of one (called Supernova 1987a, as they're named by the date they went boom), during (left half of image) and after (right half) the big bada-boom: 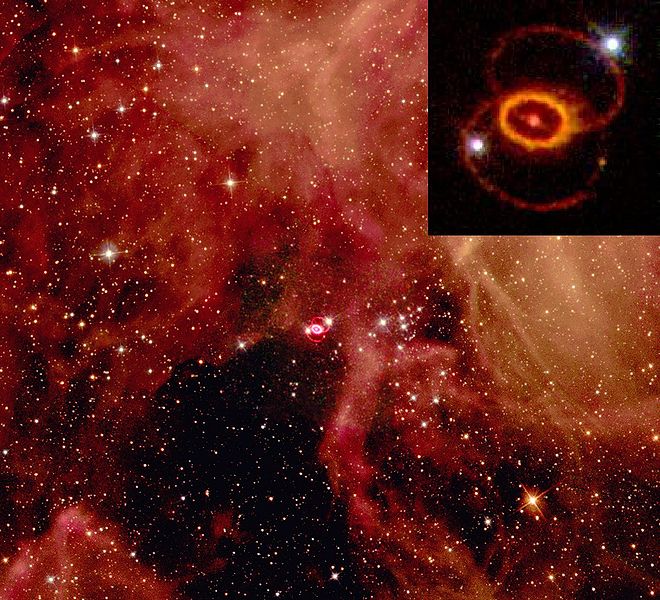 Click the image to see the Wiki article on SN 1987A.
Here's a time-lapse series of Supernova 1987a taken by the Hubble Space Telescope from 1994 to 2003, showing the collision of the expanding supernova remnant with the ring of matter that the exploded star ejected thousands of years before the supernova:

Click the image to see the Wiki article on SN 1987A.
Back to Betelgeuse. It seems that all the fuss is coming from a Bad Astronomy article published on Discover's website yesterday.

Here's the take-away: No worries! Even if Betelgeuse does blow itself to smithereens in the next few days, its poles are aligned such that it won't destroy all life on Earth, which a supernova - even at such a distance - sure could do if it were oriented just right... or wrong, as the case may be. The cool part is that, if it does blow, night will turn to day for days or weeks. That's how much energy is released by a supernova, even 640 light-years away.

Just enjoy the pretty pictures. And if it blows, the night-time reading.