Right now, a dragon half the radius of the Sun is creeping across its surface:

Click the image to see the NASA site.
Okay, it's not REALLY a dragon; rather, a cloud of plasma. But this "cloud" above the Sun is way different than a cloud in the Earth's skies. The long feature on the left of this photo is actually a solar filament made of charged hydrogen gas held aloft by the Sun's magnetic field. This filament was photographed on the Sun about two weeks ago near the active region on the right - see the sunspots. Filaments typically last for a few days to a week, but a long filament like this might hover over the Sun's surface for a month or more. Some filaments can trigger large Hyder flares when they collapse back onto the Sun. Boy oh boy do I wish that I had already gotten myself a proper Hydrogen-alpha solar telescope....

Bonus photo: After turning in final grades for summer, I took a short camping trip with some friends out to Clinton Lake. Here we are: 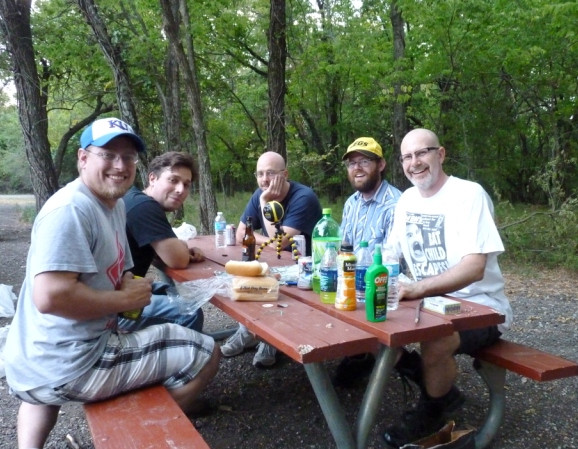 Dan, Alex, Anthony, Matt, and me.
On Friday night, the Perseids were pre-peak, but we still saw a few. Sadly, Saturday night (the peak), clouds rolled in, so we only caught a streak through the occasional break. Others had better luck:

Click the image to see the photographer's site (in German).
Fall semester has begun, so I'm off to meetings and my second class session!