In July, my charming Vespa S150 - also my primary form of transportation in Lawrence - went kaplooey and stopped running. Not only would it not start, it wouldn't turn over at all, and even the dash lights wouldn't come on with the key.

I've researched and messed around and tested stuff, but finally decided I WOULD NOT STOP TROUBLESHOOTING UNTIL IT WORKED. After working through a full Friday afternoon and into a good part of the evening, I discovered:

Not the starter relay - like new inside.
Not the ignition switch - turning the key drops battery voltage.
Not the starter - like new inside after taking it apart and reassembling.
Not any of the fuses - took apart the front end and the underseat area, and the fuses are all good.
Not the kill switch - switching it changes voltage.
Not the wiring - nothing frayed, disconnected, or damaged.
Not the coil or spark-plug wire - they're intact and firmly connected.
Not the computer - each input and output work as advertised.
Battery holds 12.8 volts, above the 12.6-volt minimum... 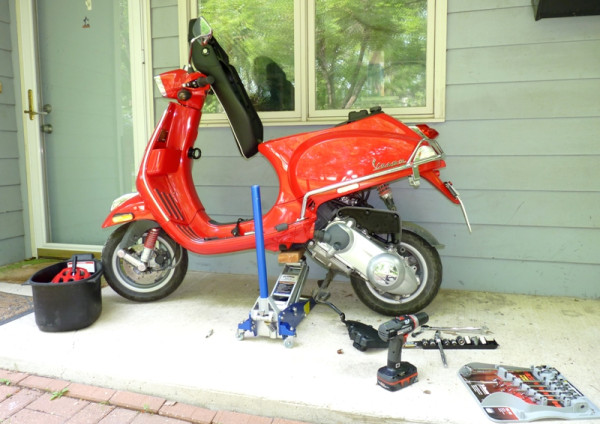 So I didn't think it was the battery, but upon reflection, I realized that the voltage was almost completely going away when I switched on the bike. Odd. wapped in my 1978 BMW R100S's battery, and the bastard fired right up.

AARGH! I could have been riding it for MONTHS if I'd just tried that before! Damn you, voltmeter, for lulling me into accepting your reading.

Nonetheless, it runs now! I ordered a new Shorai lithium battery for the Vespa, a small, light unit like the one I put in the BMW, only even smaller. Should arrive later this week. This place has the best prices on these batteries by far, and it's not that much more expensive than a lead-acid battery ($80 vs. $126) - especially when considering it claims to have a much longer life and deals with sitting around unused far better, too. Oh, and it weighs less than two pounds, versus the 10 or so of the stock battery.

In the mean time, I can technically ride my Vespa again, though the BMW's battery is a couple of inches larger, so it sorta jacks up the seat. But soon! Soon, it'll have its own, new battery of awesomeness, and I will be fully mobile again.