My publisher, Hadley Rille Books, just celebrated seven years in the business, and to commemorate the achievement made this little video. Congratulations, Eric T Reynolds (lj user="ericreynolds") and HRB!

So what does "Hadley Rille" mean? It's a feature on the Moon near where Apollo 15 landed.

Here's a shot from orbit:

And here's one just before the astronauts scooted over aboard their rover:

Click the images to see the original Apollo 15 mission transcripts.

In other exciting astro-news, asteroid 4179 Toutatis is en route to its Doomsday rendezvous with Earth - less than two days away now! 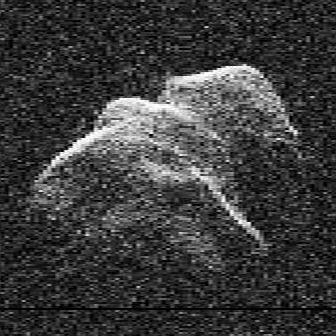 Click the image to see the Wiki page about this Asteroid of Dooooom.

Irregularly shaped at almost 3 miles by 2-1/2 miles by 2 miles, this bad boy is about the size of a mountain. Approximately as massive, too: It weighs more than 5 trillion kilograms (3 trillion-ish pounds), about the same mass that has fallen onto the Earth since it formed. When it was (re)discovered in 1989, the French astronomer named it "Toutatis," an ancient Gaulish (Gaulian?) god best known from the French Asterix le Gaulois ("Asterix the Gaul") comics, wherein the village chief often appeals to Toutatis to keep the sky from falling. Amazingly, it works! The sky never falls. And yet, now Toutatis the Doom-Asteroid approacheth....

Does this mean those who pray for the coming Mayan-guaranteed Doomsday are about to get their wish? Pshaw. Sorry to burst their bubble, but it'll pass a long way past the Moon's orbit this time around.

Still, the combination of "MAYAN DOOOOOM!" and this puppy should focus extra attention on the need to track and prepare for defending against Earth-skimming asteroids, because this one could well whack us at some point in the future, and that would be bad. It passes us every four years, sometimes closer than others... and every time it does, its orbit changes. Jupiter's gravity also messes with its orbit, so there's a chance that one day it'll rip a hole through the Earth's crust - a better chance than you'll be hit by lightning, killed by a terrorist act, or [insert your favorite cause of unnatural death].

Want to watch the asteroid through your own telescope? Sky & Telescope put together this handy viewing guide, with maps and everything. Fascinatingly, it'll blast past Earth so fast that you'll be able to watch it creep across the sky at 20 arcseconds per minute - fast enough to see its motion in real time! Due to the Earth's rotation on its axis, the sky appears to move about 15 degrees per hour, or about 15 arcseconds per second. So the asteroid will whip past even faster than the stars move across the sky. In a telescope, that'll be QUICK!

However, it'll be a challenge to find and track, of course, with all that motion. Want to watch the encounter via some Earth-based robotic telescopes? You can follow along at Slooh.com's live coverage starting in about 26 hours. Also, the Chinese Moon-orbiting spacecraft, Chang'E 2, will pass within 200 miles of the asteroid, but few expect it to provide good images because its camera configuration is only really suited for taking pictures while carefully orbiting, say, THE MOON. (Hm, the Moon keeps appearing in this post... a Mayan conspiracy, perhaps?) The Moon remains steady beneath the orbiter - unlike 4179 Toutatis, rocketing past at 11 kilometers per second (24,000 mph).