Over the past few days, I've spent a bit more time trying to start the newly fuel-injected, digitally programmed, updated Newport than I'd care to admit. No luck. Got a few nice misfires, but nothing remotely resembling "running." Yesterday, my buddy MadMattMax came over to help get it fired up, as I thought I'd reached the point where it'll happen. I'd set all the initial parameters in the MSD computer, I'd customized the ignition-timing curve, and the distributor was clocked correctly with the camshaft. When cranked, however, the engine disagreed. Turns out that the instructions in the MSD manual are wrong... well, wrong if you don't follow their suggestion to not use MSD computer control of ignition timing until you get the engine running. Well, my distributor was locked out, so I have to do it that way. So I was initially off on the timing by at least 20 degrees. That might not seem like a lot, if you consider a 4-stroke engine has a total of 720 degrees of rotation per cylinder's power-stroke; actually, though, it's more than enough to prevent the car from starting. I spent some time on the online forums and found my answer, we pulled the distributor and re-clocked it against the cam gear, and all seemed right in the world.

Oh, and even here I had to do custom work, like everything else on the Newport, this time a special, custom-ground distributor cap. Yep, to make the new MSD digital distributor's cap fit (and so I can rotate it as needed for tuning), I've had to grind it a bit: 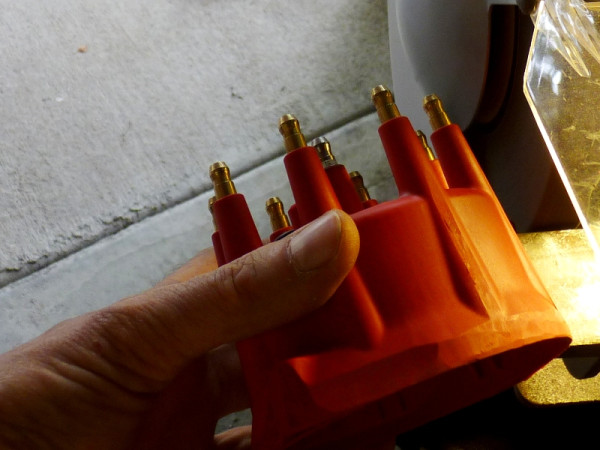 It's a tricky balancing act, because I don't want to remove too much material to make it weak, but it won't fit right or work correctly if I don't remove just enough....

This morning I went to the parts store and picked up a new set of spark plugs, because the soaked one also looked fairly filthy from previously running on a carburetor and poor ignition timing. I put the plug back in, then continued along to piston number 1 (the magical cylinder where one sets one's timing). Just to be safe, I decided to pull the valve-cover to make sure I had inserted the new distributor at TDC (top-dead-center, when the piston rests at the top of the cylinder, half-way between the up-stroke and down-stroke), which is when the spark should fire and create the power-stroke, rather than at the anti-TDC (same as normal TDC, only when the valves are open to let the exhaust out and the fresh charge is starting to pour in). I got a little surprise when I pulled the cover.

I guess this explains at least part of the difficulty I'm having in starting the car: 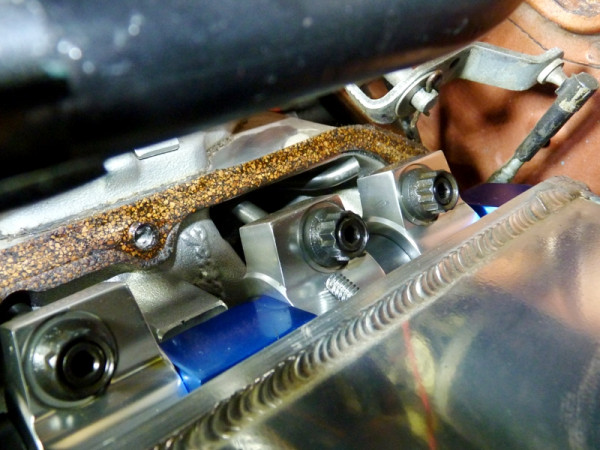 See that curved gray tube near the right-center of the photo, just below the cork gasket on the right side of the head? That's the end of a pushrod (minus its little cup-end, which had fallen off entirely - but thankfully didn't drop into the bottom of the engine). It should look like its sibling, the straight rod just to its left, resting against a ball on the bottom of an adjustable black nut on top of the valve's rocker arm.

Time to order a new pushrod. I guess I had better check the other side, too, just in case. Engines don't run well when they can't open valves.

In writing news, I'm coming along on The Galactic Adventures of Jack & Stella - just had a few breakthroughs in understanding Jack and Stella and their personal character arcs. Hooray! Also making more progress on a new SF story.

In teaching news, just started diving in to the final projects for my summer Intensive Science Fiction Institute course. Had to deal with a really annoying and slow new version of Blackboard to do so, bless the little hearts of the Blackboard programmers; can't wait to figure out how to turn off all the new crap that gets in the way of doing my job.

That's all for now. If you live around these parts, I hope you're enjoying our new Fall-Like Summer in Kansas! (Seriously, weather? Temps in the 60s and all-day thunderstorms? *sigh*)