Click the image to see the Wikipedia article on the history of lunar landings.
Jade Rabbit touched down in Sinus Iridum ("Bay of Rainbows"), the northern part of Mare Imbrium ("Sea of Showers") in the Moon's Northern Hemisphere. CHINA IS ON THE FRAKKIN' MOON, FOLKS.

Here's the Chang'e 3 lander saying goodbye to its Yutu rover:

Check out this great ITN (British news) video with footage of the whole historic mission:

Readers of this blog are probably wondering why I haven't written about this until now. Well, beyond the usual excuses (final papers are arriving fast and furious, plus other obligations), I was just plain astounded by the news: China - the last communist-dictatorship mega-nation - is the one that has returned to the Moon, and it's a part of their military (whereas NASA, though tied to the US military, is independent). This is huge in so many ways, folks: No one has explored the Moon (except by orbiting or crashing into it; the latest hard-landing was NASA's LCROSS in 2009) since the 1970s. No one has ever set foot on the Moon except for Americans, and that ended in 1972 with Apollo&nbsp17, the program that ignited passion and excitement for space like nothing before with photos like this one of John W. Young on the frakkin' Moon: 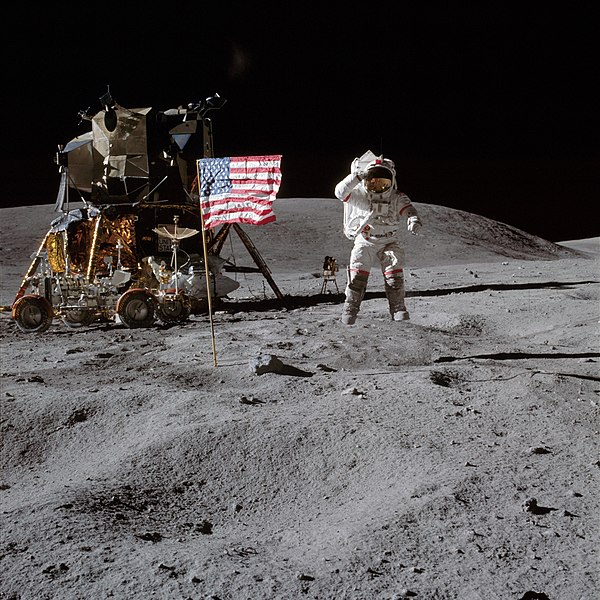 Click the image to see the excellent Wikipedia article on the Apollo program.
The US Apollo program (and the Soviets counterpart) was motivated less by passion for space exploration than a desire to prove our technological superiority to the world. When the Soviet program faltered - after soft-landing the first rover - the steam went out of US exploration, thus beginning the era of the space-truck Shuttle. Besides the early excitement and a couple of catastrophes, most people didn't even know when a Shuttle was launching. On the other hand, the Chinese have long-term goals at play. Are they as interested in exploration as they are in displaying their techno-feathers? Do they primarily aim to prove their capability to do things no one else has done for 40 years? Or are their intentions darker?

Jade Rabbit is only the latest step in China's methodical space program. They have enjoyed a series of triumphs in crewed space flight during the past decade, including launching humans into orbit and docking two ships in space. China lost its first (and only) Mars probe soon after launch in 2011 - it's important to note that this was due to a Russian booster failure, not a failure of Chinese equipment - but both of its Moon probes (the previous Chang'e 1 and 2, named for the luminescent goddess who lives on the Moon), like its manned space missions, were successful. They plan to send another rover just like this one soon, then a robotic mission to return lunar samples by 2018. Assuming these missions are successful, they plan to send taikonauts - Chinese astronauts - to walk on the Moon a few years later. After that, who knows? Moon bases? Taikonauts leaving footprints on Mars? Chinese flags flying over a multitude of Solar System objects?

Fan-art Photoshop of an Apollo photo.
It all began with a race, then Apollo's tone hit it just right, involving everyone in what NASA cleverly forged into a human - rather than American - endeavor, thus igniting a passion for space that spread across the whole world: 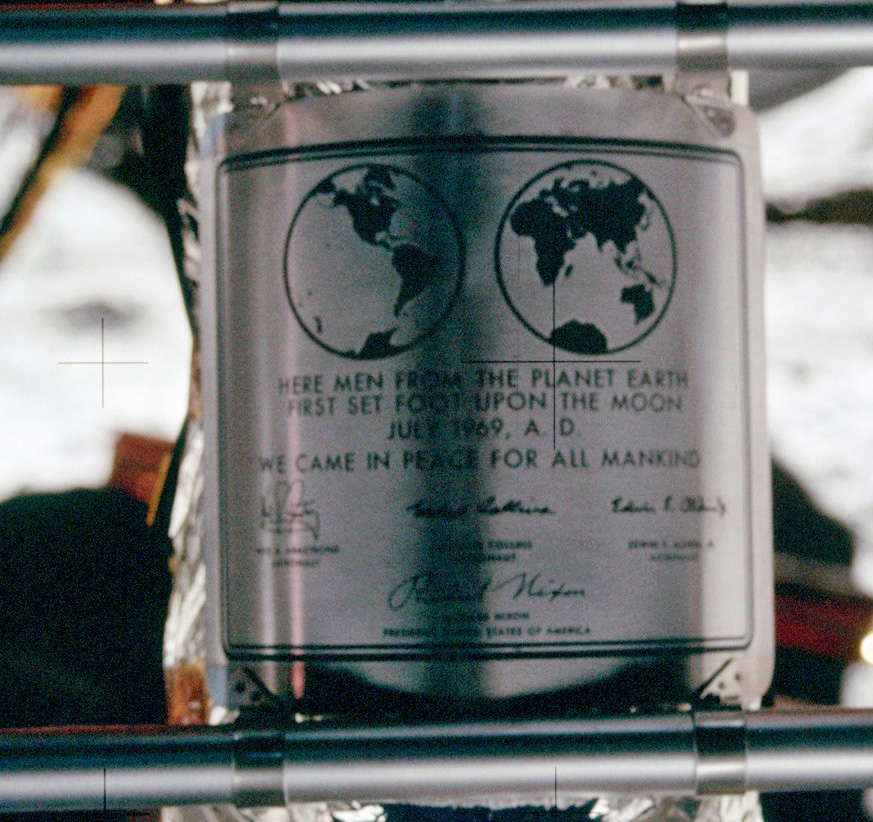 With images like the first Earthrise seen from lunar orbit, taken by astronaut Bill Anders through the porthole of a frakkin' spaceship: 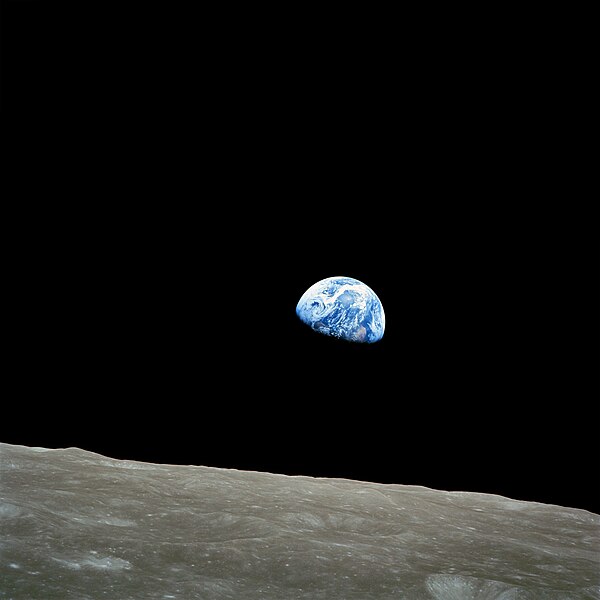 Until that moment, humans traveling to other worlds was "science fiction." When that image made its way back to Earth, the world had forever changed. Putting humans into space made it real for us; rockets and satellites (starting with the Soviets' 1957 Sputnik) and rovers were damned impressive, and blew us away. But putting people into space transformed the endeavor into something real, something we might do or have done, if only our lives had gone a little differently. Rovers after that have improved so much, and NASA was so brilliant with its Spirit and Opportunity Mars rovers, that we can identify a little with them. But if the Chinese put a person on the Moon, they'll once more re-ignite the human imagination. If they set foot on Mars? I can't even imagine how powerful that would be to the human psyche... and how terrifying to some: the Red Menace on the Red Planet.

Ultimately, if you're like me, you hope that the Chinese determination spurs a more enduring human emigration beyond this tiny world's fragile surface. I'll leave you with this quote from James Gunn, perhaps the foremost Asimov scholar:

"In 1973 [Asimov] pointed out that we were living in a science fiction world, a world of spaceships, atomic energy, and computers, a world very much like the world that he and other science fiction writers had been describing a quarter-century before. It was a world typified by the first Moon landing, four years before. 'Science fiction writers and readers didn't put a man on the moon all by themselves,' he told me, 'but they created a climate of opinion in which the goal of putting a man on the Moon became acceptable.'"

Hear, hear. As much as I feel conflicted saying this, Thank you, China. Let's hope the rest of the world feels the spurs to reach up and explore beyond our little neighborhood once again.
( Collapse )
Chris
Collapse